Home > A look at AGORA usage in the world

A look at AGORA usage in the world 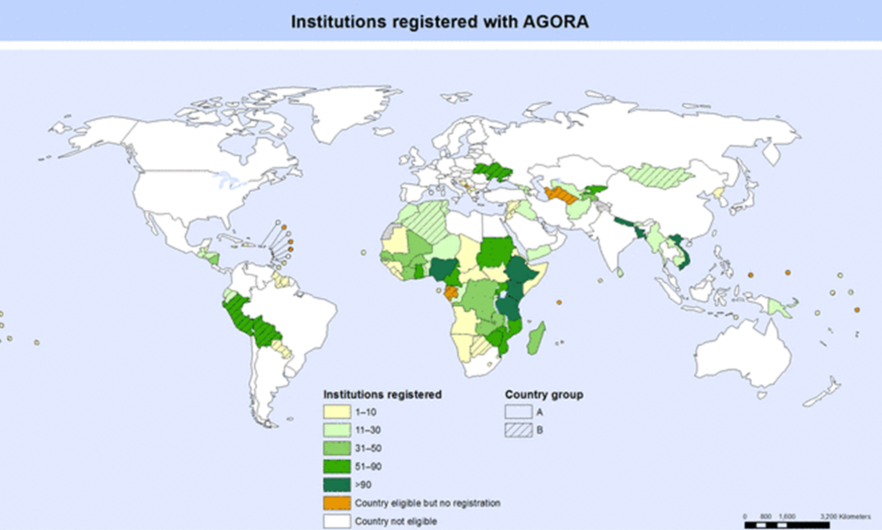 Africa leads in terms of usage, but AGORA has considerable presence in Asia and Latin America.

With by far the highest number of registered institutions in the world Africa uses AGORA the most, especially Sub-Saharan Africa, which accounts for the vast majority of log-ins, and Western and Eastern Africa, with over a third.

However, AGORA registrations are growing worldwide.

Asia is the second biggest user after Africa, with high pockets of AGORA use across all regions of the continent, especially Bangladesh, Vietnam, Sri Lanka, Mongolia, Cambodia, Nepal, and the West Bank and Gaza.

Following closely, Latin America is the third biggest user of AGORA, particularly Honduras, Bolivia and Caribbean countries. Reflecting this trend, Spanish and Portuguese are two of the best represented languages in AGORA publications, after English and French.

Elsewhere, in Eastern and Southern Europe the Ukraine accounts for over three quarters of all AGORA log-ins, while the significant user-ship in Oceania mainly comes from Fiji and Papa New Guinea.

A quick look at the map above, however, shows that some countries are eligible for AGORA but haven’t yet registered.

Please help to spread the word by letting colleagues in institutions in different countries know about AGORA, and its parent initiative, Research4Life.

Previous article
« Research4Life Training workshops: An overview of the past year