Mario Heredia is a doctoral researcher at the Centre for Environmental and Marine Studies (CESAM) of the University of Aveiro in Portugal. 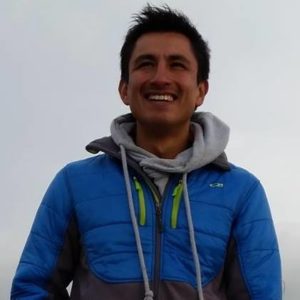 When researchers are working for a country they love, they can do amazing things. When they are backed up by a global community, anything is possible.

Mario Heredia is a proud Ecuadorean, but the story of how he advocated for change in his country reaches out across the whole world.

After initially studying for an engineering degree, he was working for an oil company. From there, he received a two-year full scholarship from an Ecuadorean government progamme, which allowed him to travel to Portugal. “My supervisor had to have quite an open mind, to leave me alone on another continent!” he remembers.

His time in Portugal changed everything. “They have universities that are 700 or 800 years old. They were older than the recent history of Ecuador.” The new environment, and the facilities and infrastructure that were available to researchers, made Mario look at academia differently.

“Before I went to Portugal, the word ‘professor’ had an incomplete meaning for me,” says Mario. “I thought it just meant, ‘lecturer’. But when I came to Portugal, I realized that being a professor was actually about producing research, creating knowledge and guiding others to create knowledge too.”

He says with a smile, “It made me think, ‘I would like to be a professor.’”

His time overseas also made him think of the people who had put him there. “I feel like I owe a debt to my country. To the tax-payers, whose money was spent on sending me to Portugal. And the best way to pay my debt was to use my education in aid of social change and sustainability.”

In his PhD and beyond, he was determined that his work would benefit Ecuador and the surrounding countries. “I love South America. I’ve spent a lot of time in Peru, Colombia and Venezuela, and the people are so kind.”

His area of expertise is biomass technology, and how it can be used to improve agriculture. This work particularly benefits small enterprises, often owned by indigenous Andean Ecuadoreans. Mario leaves his Quito home for weeks at a time, to go into the mountains and learn more from them.

This method is known in South America as Participative Action Research. “It’s quite a romantic concept”, says Mario. “Researchers should be with the people before they go to the laboratory. It requires respect from researchers to communities. Using ancestral knowledge alongside scientific knowledge.”

Mario learned about the community’s needs, their supply chains, their decision making process, so that his biomass research would work for them. But there was a problem. The research infrastructure that he had experienced in Portugal simply did not exist in Ecuador.

“I found a lot of constraints”, Mario says. These constraints sent Mario to find new solutions. And for this, he went to the Open Source community.

“It was like an alternative reality”, he says, “where people actually believe that they can do whatever they want.” In Open Source, Mario found access to the information, software and code he needed to create a research platform. But he also found a community.

“It makes you feel that you are not alone,” he says. “Researchers come together from all over the world.”

This international community helped Mario to develop his platform at a fraction of its usual cost.

He saw his research achieve publication in top scientific journals, which in turn allowed him to advocate on national policy.

His research contributed to the Ecuadorian government’s decision to re-direct the money currently spent on subsidies to fossil fuels, in favour of sustainable methods.

Mario still lives in Ecuador, still travels regularly to stay with Andean communities, and provides his own experience and expertise to others in the great global community that helped him to make change in his country.

This story is part of “Information in Action: Celebrating Research Advocacy Champions” a booklet with the best stories of the Research4Life/INASP Advocacy Competition.

Next case study
Knowledge is Power »