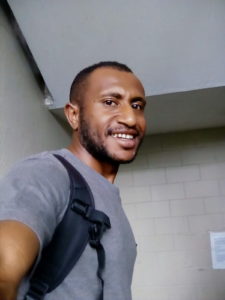 Lui Philip Kame believes in giving people power by giving them information. “I decided to become a librarian because I wanted to be involved in the empowerment of my country’s people,” he says of his role at PNG University of Natural Resource and Environment in Port Moresby, Papua New Guinea.

“I want to empower people by making the right information available at the right time and easily accessible by those who need it.”

This is a common theme among librarians – knowledge leading to power leading to success. And Lui’s advocacy work pays testament to his belief. Before he had the power to change his library for the better, he had to acquire knowledge.

When Lui joined the university, the Library operated on a desktop-based stand alone library management system. All the work was offline, delivered by people working in parallel. Lui became quickly aware of systemic flaws.

“There were instances of inconsistency in records,” he remembers, “due to the fact that records needed to be copied to removable storage devices, and transferred from one PC to the other.” Records were lost, information was duplicated inconsistently, files were corrupted. But at the time, internet speeds were unreliable, and so a fully online database was impractical.

Lui knew things could be better. But he also knew that he needed to learn more in order to make it happen.

“I have to give credit to my employer,” Lui says of the training programme that changed his career. PNG University of Natural Resource and Environment is a government institution, with research interests in agriculture, fisheries, climate change and forestry.

The Head Librarian at the university allowed him time to attend specialized training in Web2.0 technology, information management and social media.

The training empowered him to develop a solution himself: a mini-ICT networking system that provides online services for the library to complement its traditional over-the-counter services.

His training not only gave him the knowledge to deliver this networking system, with the help of IT staff and his fellow librarians. It also empowered him to advocate for it. He was listened to within his institution, because of the fact that he had been trained. Knowledge led to power, power led to change.

His system allowed library staff to work more efficiently, knowing that they were all working from the same data. It also gave academic staff and students access to the information they needed, whenever they needed it.

“I am proud that the students and staff are benefiting. They are now able to access information anywhere and anytime,” Lui says.

In support of the new system, the library has also registered as a user at HINARI, OARE, AGORA and ARDI. Lui also used the infrastructure of social media to support his solutions, adding Facebook, Twitter and Google+ accounts to reach out to the library’s stakeholders.

Lui is proud to mention that Papua New Guinea is “home to over 800 languages and cultures,” incredible diversity in a country of less than eight million people. In improving his own knowledge, Lui was able to make knowledge easier to access for thousands of his fellow citizens.

Next case study
Mary Acanit advocating for Technology in Uganda »