Unlocking the door to world-leading science 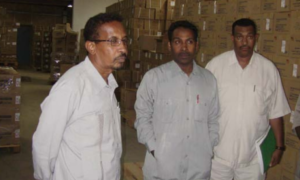 As Director General of Sudan’s Central Medical Supplies Public Corporation, Gamal Khalafalla Mohamed Ali (at left in the above photo) heads the national government agency responsible for medical supplies to all public health institutions. If any role requires access to reliable, up-todate information on medicines, this is it. His job requires him to advise on how medical supplies might best be regulated, organized and financed to ensure that millions of people have the best possible chance of staying healthy. He and his agency colleagues formulate, implement and evaluate health policies and reforms, and develop programmes and systems, the success of which directly influences the well-being of the Sudanese people.

Dr Khalafalla works hard to base his policies and proposals on evidence, using the best research available to deliver programmes that have the greatest possible chance of succeeding. But it wasn’t always that way. Ten years ago, when he worked at the Khartoum State Ministry of Health, basing policies on evidence simply wasn’t possible. For a start, the ministry subscribed to a single, solitary journal. Without access to evidence, policies were formulated as a response to short-term pressure or prevailing political circumstances, with the long-term implications more or less ignored.

This approach to policy-making is less than ideal in any country, let alone one that has some of the largest health problems in the world. Poverty in Sudan is deep and widespread, and its health indicators (e.g. progress towards the United Nations Millennium Development Goals), although comparable with other countries in subSaharan Africa, rank below those of the Middle East and North Africa. But how can you base policies on evidence if the evidence is not available?

«To me HINARI is like water and oxygen; it is vital for me»

Things took a dramatic turn for the better in 2002, when the World Health Organization gave the Federal Ministry of Health access to Research4Life’s HINARI programme. “As a policy-maker, I use research published in HINARI for formulating research-based policies,” says Dr Khalafalla. “I have written many proposals, and most of these find their way to implementation. A major reason for this, I think, is the evidence that underpins the proposals.”

Dr Khalafalla describes the move to evidence-based policy as a qualitative leap in the government’s way of thinking. “It exposes us to the international research community,” he says. “With just a click, you have access to high-quality international publications.”

Using the published scientific research available through HINARI makes it much easier to convince other policy-makers at federal and state levels about the merits of his agency’s proposals.

Numerous evidence-based proposals developed by Dr Khalafalla and his agency in the past few years have since become policy in Sudan. These include:

Access to publications such as the Journal of the American Medical Association has further boosted pharmaceutical regulation in Sudan. For example, a 2008 paper on “Safety-related regulatory actions for biologicals approved in the United States and the European Union” helped Dr Khalafalla convince colleagues in the Medicines Registration Committee to develop requirements for the registration of biological products.

Research4Life has also been instrumental in Dr Khalafalla’s work to build pharmaceutical capacity in Sudan. The government supported his agency’s proposal to implement a postgraduate fellowship programme in managing pharmacy services. As of 2011, 34 people have graduated, with another 32 fellows currently studying. He has also led the development of the syllabus for a master’s degree in public health, and his proposal for the establishment of a programme in pharmacy professional development was accepted by the Sudanese Pharmacists’ Union and is now being run by the Federal Ministry of Health.

Finally, the past decade has seen Dr Khalafalla advance his own pharmaceutical research. Despite graduating in the early 1990s, a lack of up-to-date literature meant that it was not until 2004 that he published his first paper. With that problem now in the past, he has published an important book – The Impact of the RDF on Accessibility of Medicines: Experience of Khartoum State (pictured) – along with 10 other academic papers. He is also able to keep abreast of the latest developments in other areas of interest, including those in which he teaches, such as pharmacoeconomics, medicines supply and drug regulations.

Next case study
Through HINARI, research and teaching at the University of Lubumbashi has flourished »